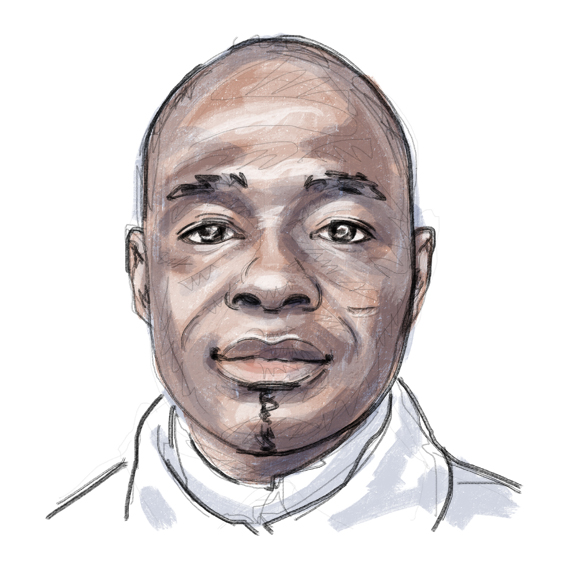 “In the summer, I often jog to work. A 14 kilometers round trip from Drancy. I leave around 5am. Since I was a child, I have loved running: the 100 meters, the 200 meters… I watched the Olympics a lot. It was my dream to make a career out of it. Today I can’t anymore, but the sport is still in me.

When I come home, often I feel lazy: go out again, run, all that…” Quick sidebar: “laziness” for Adama means sixty pushups and jumping rope…

“Why not do it while going work? I tried it once and saw that it was possible. Doing it every day, even if it’s like ten minutes, it’s good! When I get there, I take a good shower: on site showers are necessary in our jobs anyway, for cleanliness.”

Adama has worked for six years as a garbage collector at the Direction de la Propreté et de l’Eau in the northern sector of the 19th arrondissement of Paris.

“We leave from the Darty at the Porte de la Villette, we go as far as the Lidl at Porte d’Aubervilliers, and up to the lift bridge on Rue de Crimée.

This sector is divided into thirty-two sections. Every morning, a new schedule is posted with a section number in front of each name. You can also ask for a ‘home section’ and remain in the same section up to several years. At first I changed a lot: I like to know everywhere a little.

For the equipment, we’re in pairs. It can be the street cleaner, the small one or the big one, to clean the bike paths and the roads with the lancer – a pipe in the back. When that doesn’t work, we use the ramp that is placed in front. Or you can be on a carrier: it’s a small truck for debris. Or the master, bigger than the carrier, which takes care of the bulky refuse. And we have the glouton*, it is a suction machine: the small one’s for the bike paths and the sidewalks, the big one does the pavement. The blowers are used mostly in the fall and spring, when there is more weeding to do.

I like my job, but after, well: the residents who are there, they have to accompany us, so they can understand a little about what we do.

Often after cleaning the sidewalk and going around the building, you see that it’s as dirty as if you had done nothing. You were here thirty minutes before, it’s not as dirty, but you see papers anyway. Not nice. Why don’t you take them? Since you weren’t there, you ask yourself questions: ‘Did the person do it on purpose?’ You can blame them but didn’t it just fall out of his pocket or something like that? Often people see us sweeping and they just throw something; I don’t say anything because it’s part of my job. But sometimes it’s, like, disturbing.”

Adama smiles: “Cleanliness matter a lot to me, even when it is at home. I often argue with my wife about that!

There are also those who pick up after their dogs when they see us and others who don’t, especially when they know there is no one watching. Everyone would still rather see a piece of paper than dog poop!

The 19th is better in terms of cleanliness, especially with the train station, it has improved a lot, people’s ways have changed, and it’s nice.”

– And the behavior of people towards you, a little smile, a hello, does that happen a lot or not?

– Not at all! What hurts is that you allow yourself to say hello to the person but the person doesn’t respond.

Adama bursts into laughter: “Exactly!… In the morning, I often notice, while we are there at the people service for the city to be clean, that people pass by and don’t even say hello. I don’t know, they think you’re going to attack them? When you are with your rolling bag, people put their litter in it when they should use the bins: some ask you if they can do it, others don’t. The least they can do is to say hello and ask.

I like to say hello to people. I look at them, and if they look at me, I greet them and some greet me back.

I like what’s clean, that’s who I am. I have brothers, I go to their place, it’s a mess! I came from Côte d’Ivoire in 2004, I have two boys who are 11 and 9 years old and I want to pass on to them two important things : behave well and fight to succeed. I have a mark on my left cheek, it’s not an accident. That’s what’s done in a tribe, when a child is born to protect them from illness. With that brand, we know right away where you come from.”

– I had barely seen it. Would you allow me to draw this mark in your drawing?

* Glouton means glutton in English but in this context it is also the brand name of the suction machine, GLUTTON. 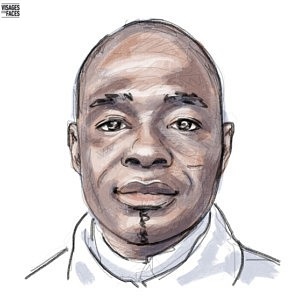 I like to say hello to people. I look at them, and if they look at me, I greet them and some greet me back.