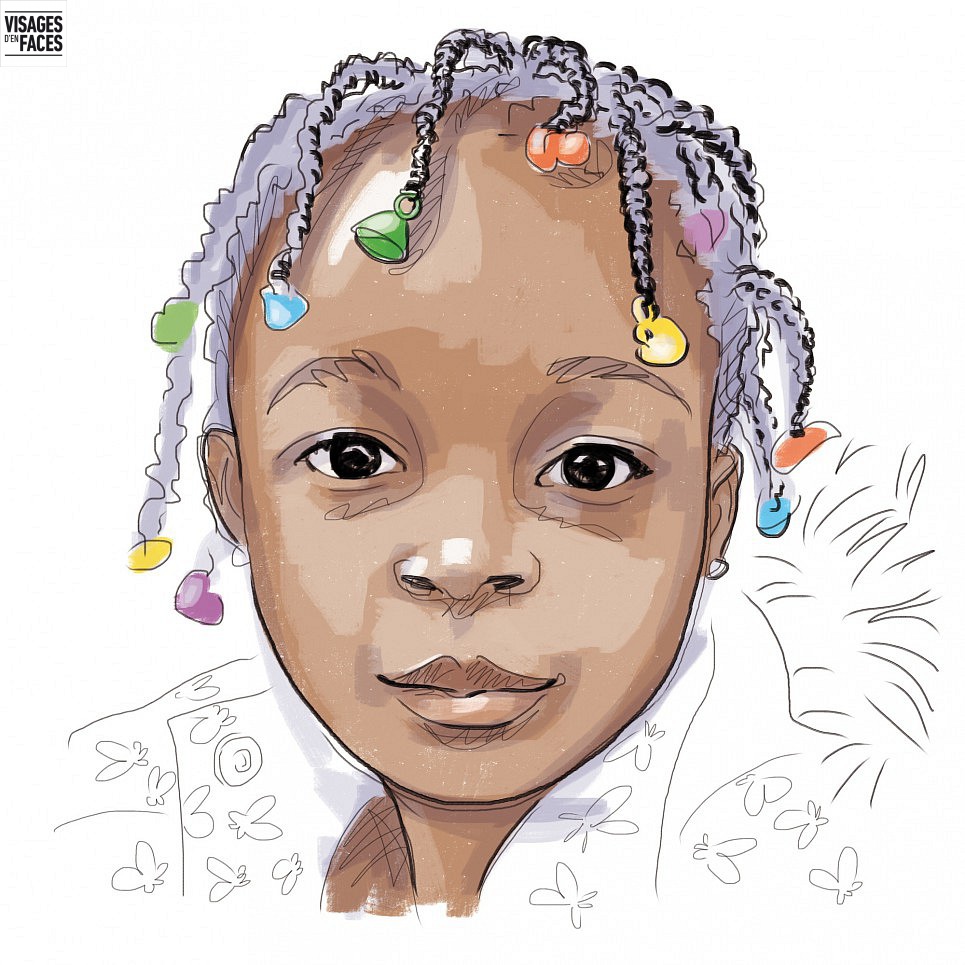 “Don’t tell me I’m going to look like this one here!” exclaims Emmanuella when she sees an example of a portrait I’ve drawn.

Emmanuella is 6-years-old and doesn’t find the portrait experience at all interesting. She was playing with the other children and now, here she is, obliged to come with her mother and me to a cafe.

My explanations seemed to have satisfied her, she has moved on to other things: “Is it true that if I eat the seeds then I’ll become a green bean?” At the school canteen, I wanted to make some fruit juice and there were some seeds. They said ‘no way! If you drink the juice, you’ll swallow the seeds and you’ll become a plant!’’ Afterwards, they thought I had drunk it, but I hadn’t.” She smiled. “They say such silly things sometimes.”

While she waits, playing with the straw in her orange juice, her mother Miriam tells me. “We went on holidays to Mauritania last year to see what life is like in Africa. She saw lots of things. For example, there is no running water in the houses, they have to go and get it from the well. Later she tried to carry the water on her head.”

Emmanuella lifts her head from her glass “Oh yeah with aunty! We took combs and put them around our heads and then put a little bucket on our heads. And afterwards, we took the clothes, even if they weren’t dry, and brought them back to the house.”

Mariam: “Over there, they don’t have washing machines, it’s done by hand. It’s usually the women who prepare the meals and do the washing. The men get the wood and work on the crops, the millet. That’s how it is. They really don’t do much in Africa. There are some people who go to foreign countries to work. …The men, they’re like kings!”

Emmanuella: “They just kill the sheep. They get knives and kill them. And then we eat them, but I didn’t eat them.”

Emmanuella: “It horrifies me. Mum, she ate the muton. …. Hey! You remember.” (Crinkling her eyebrows towards her mother)

Mariam: “At least we know where the food is coming from … She saw camels, donkeys. She saw the desert. We want to go to my village, in the Sahara. It’s really beautiful. You see people in a tent, they drink tea, they eat calmly.”

When I express the desire to go to Mauritania, Emmanuella is very surprised: “You want to go there? Well, I don’t know… A white person in Mauritania? No, but you… over there, wow!”

– Do you think I could pass unnoticed?

She thinks about it, then in her maternal tone:

– It doesn’t matter, Maman, you can lend her your brown makeup. Or, I can put paint your face. And then they will say: ‘Oh look! There’s a new black person, she has lovely hair, wow! “’’

– Could you try to braid my hair? But my hair is all flat…

– You can wear a wig. Maybe you can try one of mum’s things. But it doesn’t matter because they won’t say anything about it because there are Arabs, even over there. They’ll think you’re an Arab.’’

“Mauritania is an Arab country, a country of mixed races,’’ says Mariam.

Emmanuella is obsessed with my hair: “I’ll cut your ends. You know the tips of your hair?’’

Me: “When we have these little bits here?’’

She takes, a lock of my hair.

And while she begins to do my hair, Mariam continues: “There are a lot of people in Mauritania. You speak French, Arab, Wolof, Soninke, Bambara… There are even some Chinese over there now! Where ever you go now, in the world, there is a mix.’’

Emmanuella, a real pro who talks and does hair at the same time, says: “Which country are you from?’’

Me: “I was born in France, but I know that, a long time ago, my family came from Spain.’’

Mariam: “You should show a child, right at this age, what life is like in Africa and here, in France. There are people there who are like this, there are others in different countries who are like that, in France it’s like this, in America it’s like that, each one is different. In France we are lucky to be able to go to school. After I say to her: “You see Manu, there are kids who don’t have enough to eat. Instead of wasting food… There are Africans who are hungry.’ She understands now.’

Emmanuella interjects with something very important to say: “Your hair, it’s starting to go grey.’’

Mariam: “But me, I’m pleased that Africa is developing because there’s a lot of things to do there. The president he has money, but he doesn’t want to share it. In my country, there is wealth, but sometimes the government does stupid things. They waste money. And the people least able, end up paying. You know, me, what I don’t understand is the missed opportunities. There are things you can make in Africa. With shea butter, you can open a little shop, that would give people a little bit of money, say 200 euros per month, people can live on that. For example, to grow rice, how does that work, how do you do you sell it, little things like that … but the government doesn’t lend money to young people. In Mauritania there are a lot of young people who have a university education, but they are forced to come here to work or go to Canada …’’

Emmanuella: “Don’t tell me you’ve messed up your hair?’’

We are getting ready to go and the fragile hairdo falls apart:

As we leave, Emmanuella blesses my bag with a kiss, which makes me hope that she had a good time, in the end. 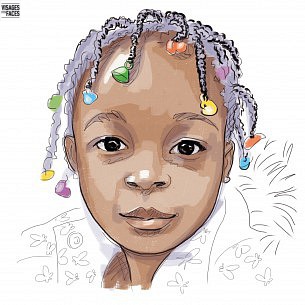 Is it true that if I eat the seeds then I’ll become a green bean?