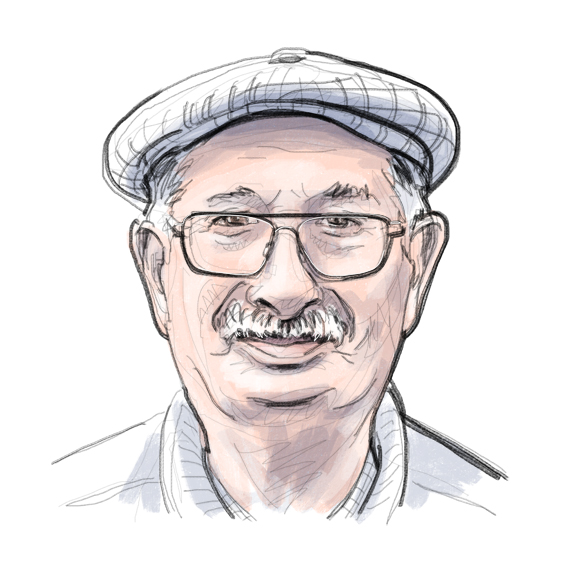 “I used to leave early, I would came back late, I only knew the caretaker. Since I stopped working, I know more people. I’ve also met a lot of people thanks to Bijou. The first was called Trésor.”

Robert, fit as a fiddle at 85, walks every day with his poodle. “I used to like walking all across Paris. But when you get older, things take more time: you got legs that don’t want to walk anymore, your mind that wanders off… That’s when you realize you’re getting old. So, I also do relaxation therapy and gymnastics at Espace 19. In the afternoon, we play belote. There are about a dozen people from our building.”

Robert grew up in the 18th arrondissement and has lived in the Michelet-Alphonse Karr neighborhood since 1976. He was “an apprentice baker for seven years. My boss wasn’t strong: he would leave sacks of flour all over the place. At the time I was a skinny string bean! Fifty kilos and just one meter eighty tall. I had to carry 100-kilo bags on my back, and I got hurt. So, after that, I joined my father at the factory. I started as a laborer, I became a milling machine operator, then a supervisor. I supervised forty people. And I finished doing prototypes.

Human contact has been lost with machines. In the small shops, you chat, while in supermarkets, there is no conversation, and there even people on their phones blabbing about all their personal business.

With Bijou, I meet people of all ages. We start by saying hello, dogs say hello to each other and that’s how we get to talk a little bit.

Especially because he is very affectionate! He goes up to all dogs: males, females, small, big… If there is one that’s too big, he still tries to see if he wants to play. Yes! He tries! There are some big dogs that are nice.

As I find it difficult to stoop, I invented a small device: I put the bags in and when I see that Bijou is about to make a poop, I put it below… and voilà! Sometimes there are people who look at me and think I’m weird: I don’t care. Then there are people who say, ‘That’s a really neat thing you made.’ But with Bijou, I have to act quickly and sometimes it’s too late…”

Despite a few moments of miscalculation between Bijou and Robert, this funny and ingenious invention makes me want to know more: “It’s a small sleeve and the bands sort of cross over. I put my bag in it; there is a clothespin to hold it because, with the wind, it can fly away!”

After another burst of laughter with Robert, I get it together again: “Have you seen this system elsewhere? Maybe it could interest other people if you explained how to do it?”

Robert: “You just have to tinker a bit, that’s all. From what I understand, in England, there is a company that makes things like that. In France, they make shovels but when it’s too soft, you can’t pick it up!” I give in: Robert and I break into laughter. At this point, we are both five years old.

To hell with trying to be serious, I decide to prolong the fun by initiating some brainstorming: “Well then, we need to move up the production chain and study what it is you are feeding the dog!”

Robert, decidedly jovial: “Oh yes! That’s something we need to investigate! When it falls in the bag, I’m happy. But when you study the pickup system, you have to think about it. And also dogs are like us, they can catch a cold, and then…

No one ever asked me how to make it, but I am asked if it is me who invented it. I have always been kind of a handyman. I especially like working with wood. I wasn’t able to become a carpenter, but I’ve made a lot of little things, small pieces of furniture… I saw the wooden ashtrays that people made in the neighborhood. I would like to work with young people: I can’t do much myself anymore, but I can show how to do things.”

Much appreciated in the neighborhood and known as the white wolf thanks to his invention, Robert concludes with a laugh: “Yes, this collection system is mine! This is my prototype!” 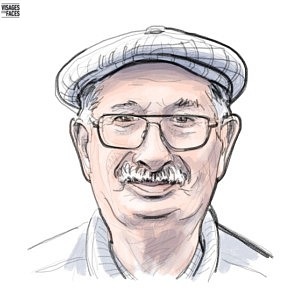